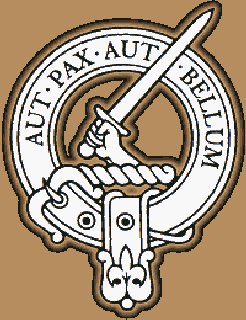 "The Gunns once held extensive territory in Caithness, NW Sutherland and SE Sutherland. They were a Norse family claiming descent from Olaf the Black and were noted for their ferocious and war-like character; their name comes from the Norse gunnr, meaning war. They were constantly warring with their Keith and Mackay neighbours, or so the story goes!"
From gunnclan.net 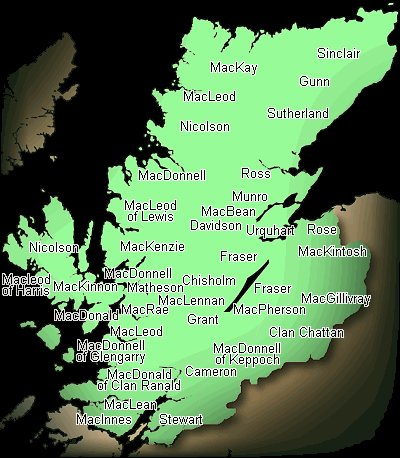 "(In the 12th century) Clan Gunn claims descent from the Norse Jarls or Earls of Orkney and from the ancient Celtic Mormaers of Caithness through Ragnhild, daughter of Moddan in Dale, son of Moddan, Mormaer (High Steward) of Caithness, who was killed in 1040, and granddaughter of Saint Rognvald, Jarl of Orkney, who married Gunni, the reputed name-father of the Clan. Gunni was himself a grandson of Sweyn Asleif's-son, the 'Ultimate Viking' and hero of the Orkneyinga Saga
(In the 15th century) ... After the death of George, the Crowner, and his sons at Ackergill, the Clan split into three distinct families -- James or Seumas, the Crowner's eldest son who survived the battle, moved with his family to Kildonan in Sutherland, subsequently known as Gleann na Guineach or Gunn's Glen, where he obtained lands from the Earls of Sutherland; Robert, the second surviving son established his line in Braemore, in the southern heights of Caithness as the Robson Gunns, and John, the third surviving son settled in Cattaig or Bregual in Strathmore, in the higher reaches of the River Thurso above Westerdale. The Hendersons and Williamsons and Wilsons of Caithness are said to be descended from Henry and William, two of the Crowners' younger sons...

The chiefship of the Clan has been dormant since the death of the son of George Gunn of Rhives in 1874. The head of the Clan, in the absence of a recognized chief is Iain Gunn of Banniskirk, who has been appointed Commander of the Clan by the Lord Lyon King of Arms at the request of the landed and armigerous members of the Clan.

The Clan Gunn Society which was formed in 1960 to promote a spirit of kinship among members of the clan throughout the world acquired the Old Parish Church at Latheron as a Clan Heritage Center. The Clan gathers in Caithness every three years. "
From Clan Gunn Society of North America